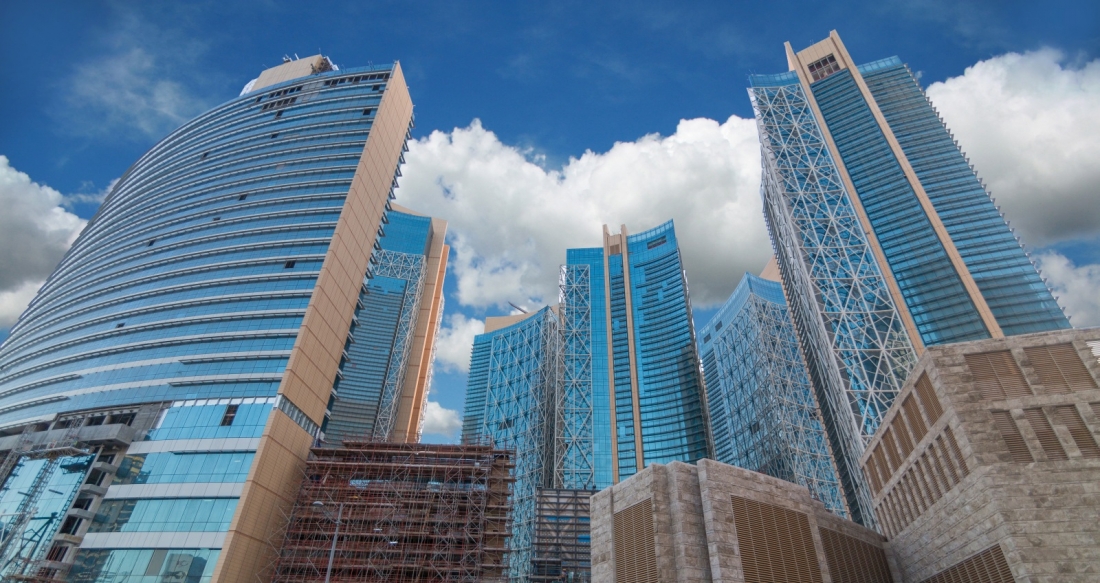 After taking our advice for an extensive slab level as-built survey to be executed on all towers, our client (Jangho) was able to back-charge the Main Contractor (Bouygues Batiment International) for incorrect works, recuperating tens of thousands of riyals

Within a matter of weeks after arriving on the project for Jangho, the Swansea Surveys deduced an issue would arise concerning the slab levels of several towers. With bracket installation already fully underway in preparation for curtain wall installation to commence shortly, the survey manager on-site insisted that an thorough as-built survey be executed to determine the heights of the slab level on each level of 4 towers.

As these works would have led to a delay in the setting-out of bracket positions (and therefore the installation of brackets and curtain wall panels) the Jangho management team initially refused. Remaining firm and explaining the scenario in full, the survey manager from Swansea Surveys was able to convince the Jangho management to allow the as-built survey to take place.

Upon compiling the results and producing extensive reports, Swansea Surveys’ deduction proved accurate as all slab level above a certain floor on each tower were outside of the agrees tolerances (the concrete levels in these scenarios were all too low.)

Using the detailed information provided by the survey team, Jangho were able to issue Non-Conformity Reports (NCRs) to the Main Contractor, Bouyges Batiment International (BBI) as the concrete levels did not allow the installation of curtain wall panels without rectification works taking place first. These rectifications were to be executed by BBI, leading to delays in the installation program of Jangho.

It is difficult to quantify the exact amount of money that Swansea Surveys saved Jangho in this particular incident, but it is estimated to run into tens of thousands of riyals.

In effect, Swansea Surveys’ team paid for itself for many, many months with this single recommendation and the consequent execution. 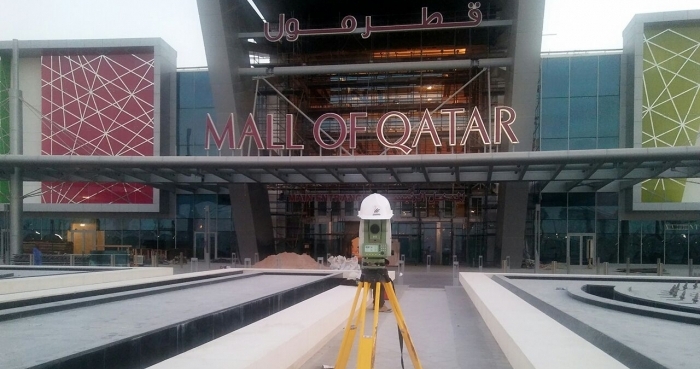 Design drawings provided by Priedemann for the feature ‘Luxury’ skylight – measuring 129m x 31m, semi-cylinder in shape, consisting of faceted steel structure supporting glass panels – did not match the site conditions. Acting on behalf of Profession Aluminium, we insisted upon executing a comprehensive as-built survey to determine the exact position of the complex steel structure. Design drawings were then created by the Swansea Surveys and passed to Priedemann. These drawing were then used to design bespoke brackets (over 250) for each position. Had this not been done, Profession would have had to re-fabricate every single bracket to suit actual site conditions. 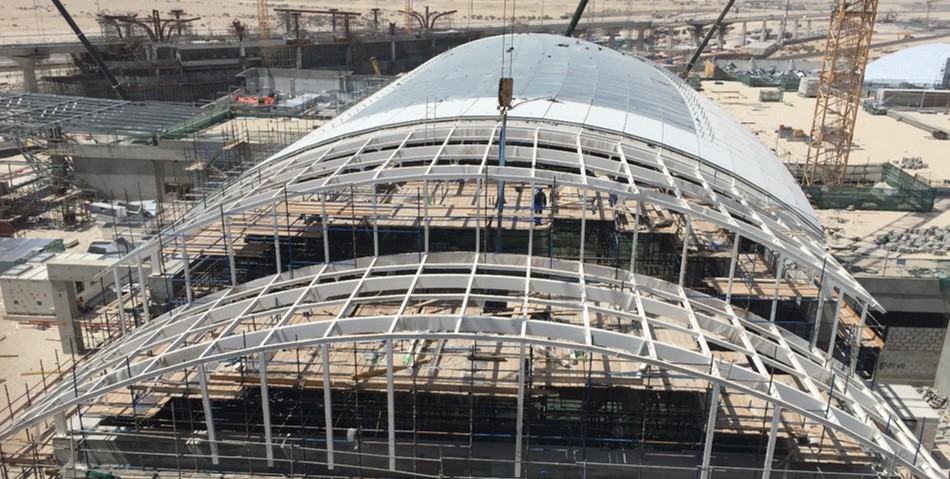 Our survey team followed standard protocol of preparing setting-out information for all brackets using the design drawings provided. Upon executing the setting-out on-site however, the locations of the marked points were not consistent with those determined during the preparation stage upon the aforementioned design drawings. Upon identifying a consistent pattern, our surveyor contacted Profession’s Project Manager to inform him of the issue.

Upon checking the drawing, our surveyor was able to determine that the 2D plan view format that was provided was insufficient and immediately submitted an email request for a 3D model to be drafted and sent to the site.

In order to quickly emphasise the fundamental discrepancies between the site conditions and design drawings, our surveyor took manual measurements of the steel rafters, annotated a photo displaying an example of the gathered data and sent it to the design team for clarification. 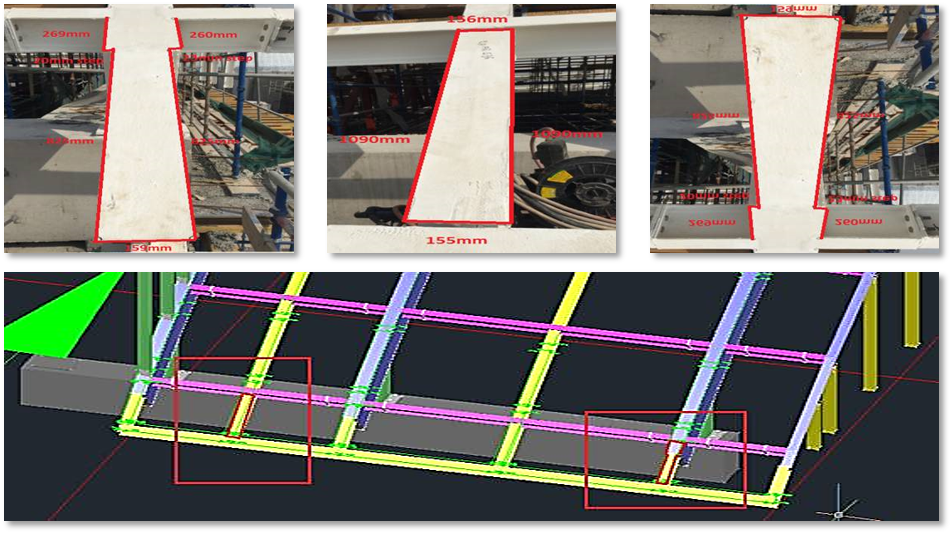 Due to a perceived discrepancy in the design and actual levels of the steel rafters, our surveyor recommended that a comprehensive as-built survey of each steel rafter be executed to determine its on-site location for x, y and z. This was deemed necessary as the faceted steel rafters caused the bracket x, y and z to be effected simply by the height of the rafters being incorrect.

The results of this extensive as-built survey were subsequently used to create a 3D model of the Luxury Skylight steel structure.

Due to the highly accurate as-built survey works (and subsequent 3D modelling executed by our Category A Surveyor on-site) Priedemann were able plot the bracket positions directly onto Swansea Surveys’ own as-built survey report to ensure all future setting-out would match the on-site conditions.

Because our surveyor was capable of producing accurate as-built surveys of the existing steel structure, Priedemann were able to design brackets with the correct dimensions for Profession to fabricate.

If the as-built survey was not accurate, the design would have been incorrect. This would have led to many costly errors, including: the consultant rejecting all installation works; all brackets (and any glass panels) having to be uninstalled; re-fabrication of every single bracket plus any standing time of labour during these delays.

Swansea Surveys act as a pivotal link between the appointed design team (Priedemann) and fabrication/installation team (Profession Aluminium). Without the input and collaboration of our surveyors, fundamental discrepancies between the design and the on-site conditions may not have been discovered until several months into the project.

By first identifying and then being heavily involved in providing a solution, both Priedemann and Profession Aluminium were able to avoid significant hidden costs and delays. Furthermore, the project schedule as a whole was expedited. 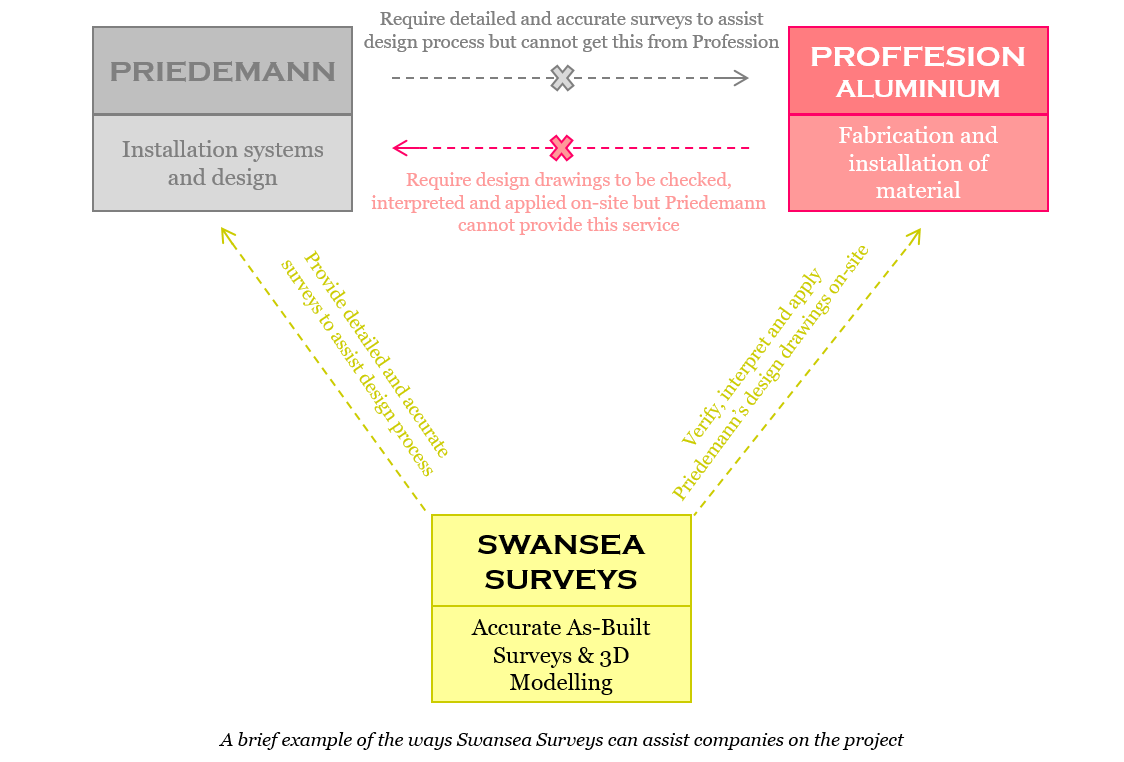 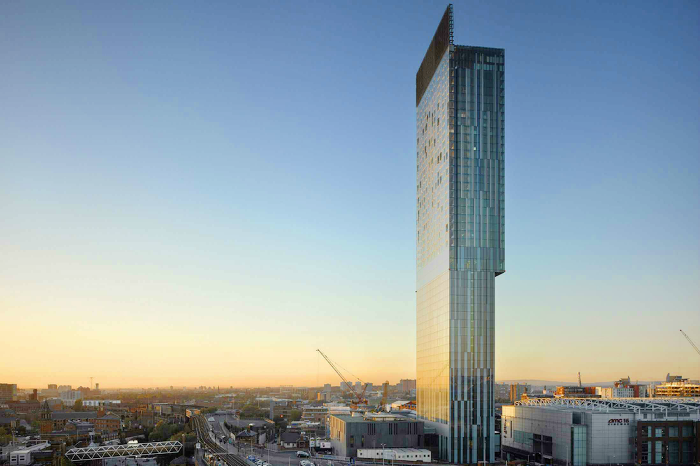 After arriving on the project our surveyor discovered a significant oversight upon the datum levels and subsequent concrete levels on floors 17 to 35. It was determined that the Main Contractor’s surveyor was not allowing for building settlement and all datum levels were accumulating a -4mm error on each level. Our surveyor established the correct datum levels on each floor and BUG Alu-Systemtechnik (curtain wall company) were able to charge Carillion (main contractor) for the re-drilling of over 200 brackets per floor (approx. 4,000 brackets over 19 floors), saving BUG an estimated £40,000. Had our surveyor not spotted this oversight and corrected it, it is likely that BUG would not have been able to identify the issue and would have been forced to re-drill the brackets at their own cost. Around 50% of our service fees for the the whole of the project were covered by discovering this one error..

It was discovered early on in our surveyor’s time on the project that the was a significant issue with the datum levels that had been established by Carillion’s surveyor.

With a superstructure as considerable as the Hilton hotel, building settlement and compression is inevitable and extensive. It appearted that Carillion’s surveyor had not factored enough movement as a result of this settlement and compression into his calculations when transferring primary datum levels to each new floor of the building. This resulted in approximately 4mm being ‘lost’ on each floor, and this 4mm was being accumulated with every new floor that was established.

As part of our usual process, our surveyor transferred his own datum levels to each floor and it was during this process that the issue was discovered. Double- and triple-checks were exectued before our surveyor infomred BUG of the issue and an emergency meeting was called. Our surveyor, despite facing substantial disagreement and hostility, was able to convince all parties that his methods were accurate and advised that corrections be made immediately, or even greater problems would be faced on higher floors.

In the end, Carillion agreed that this issue was their responsibility and instructed BUG to re-drill holes into each bracket that was effected. BUG used their installation teams to drill these holes, into around 4,000 brackets, and Carillion agreed to cover the cost. It is estimated that the works totalled approximately £40,000.

Our surveyor was on the project around 8-9 months, so roughly 50% of our service fees for the whole project was covered just by discovering this one issue and winning the argument on behalf of BUG. Had Swansea Surveys not been on that project, it is highly likely that Carillion would have won the argument during that pivotal meeting and BUG would have been forced to pay the £40,000+ to re-drill the holes themselves.